SKOPJE, North Macedonia — Irena Lozana knew something was wrong when her son Kan stopped talking and began to withdraw from other people, preferring to play alone.

“Building typical friendships and playing games with others is not part of his life yet,” Lozana says. Kan, now 11, is a child with autism spectrum disorder (ASD), a diagnosis that creates numerous challenges for both parents and children, especially as they enter their teen years.

But families like the Lozanas now have a new tool with which to navigate some of these challenges: a UNFPA-developed online education platform that has taken on heightened importance amid the global COVID-19 pandemic.

“The lack of social skills among people with autism spectrum disorder is particularly noticeable in the area of sexuality and intimate relationships,” says Tanja Stankova, a special needs teacher. She explains that even the most basic changes that occur during puberty can often be confusing to young people with ASD, who do not always know what to expect as they develop sexually, or how to distinguish appropriate from inappropriate behaviour.

The new digital platform developed by UNFPA in North Macedonia allows young people with ASD to access accurate, age-appropriate sexuality education information at their own pace, in a safe environment. Digital tools for every type of education, including sexuality education, have become particularly crucial for all young people since the new coronavirus disease (COVID-19) began spreading around the world in January. All schools and universities in North Macedonia switched to online learning in March in order to keep students’ education on track while classrooms remain closed as a public-health measure.

The content of UNFPA’s new online platform is based on the concept of “Social Stories,” developed by Carol Gray in 1991 as a learning tool for children, adolescents and adults with autism. It was developed as a project of the Global Innovation Fund, with support from the governments of Denmark and Finland.

“The stories on the platform cover a variety of topics according to the stages of a person’s sexual development,” says Stankova, who wrote her master’s thesis on sexuality education for people with autism spectrum disorder, and served as a consultant to UNFPA on the new project. “This ranges from body parts, private and public spaces, puberty, and pleasant and unpleasant touches, all the way to sexual feelings, sexual intercourse, intimate relationships, and protection from sexually transmitted infections and unplanned pregnancy.”

Many young people across the Eastern Europe and Central Asia region still lack access to high-quality comprehensive sexuality education. Schools in North Macedonia are among those that do not offer a separate academic subject on the topic, though some elements such as sexually transmitted infections are addressed in biology classes and life skills education.

Both parents and teachers and other professionals working with children with ASD highly value the usefulness of digital tools in comprehensive sexuality education, according to a recent survey conducted by UNFPA North Macedonia. Parents and teachers also say they are using online platforms to help children with ASD engage socially, such as by listening to music or playing games, as well as for educational purposes.

The barriers to access comprehensive sexuality education are particularly high for young people with autism, especially since they often lack understanding about what is happening with their own bodies as they undergo physical and emotional changes. Their parents, caregivers, educators and peers also have limited information about the sexual needs of young people with autism, a topic often seen as taboo to even discuss, or how to address sexuality-related topics with them. Fear, intolerance and discrimination also stand in the way of receiving information and services related to sexual and reproductive health.

Globally, 1 in every 160 children has an autism spectrum disorder, according to the World Health Organization. An estimated 12,000 to 15,000 people in North Macedonia are affected by autism out of a total population of 2 million, but the country lacks official data on the topic.

“The public should become aware of the existence of children with autism,” says Lozana. “When we visited the doctor with Kan, we unfortunately came back feeling even more sadness, fear, self-blame, confusion and anger. Even today, the Mental Health Institution for Children and Young Persons meets only the minimal capacities for dealing with the needs of families with children with disabilities.”

“My child is currently facing the beginning of his teenage years, when hormones will do their work and his needs will change, as will those of all the other children,” says Lozana. “But sexuality as a need and a process is still a taboo and a major issue when it comes to sharing appropriate and accurate information with a child with autism.”

The North Macedonia Country Office started creating its digital stories as part of a global effort by UNFPA to develop innovative approaches to ensuring universal access to sexual and reproductive health through the use of technology. North Macedonia was one of eight worldwide UNFPA teams chosen to participate in a global Innovation Bootcamp held in Munich, Germany, in July 2019.

The team has tested a prototype of their digital stories as part of the UNFPA m-health platform, gathering feedback on the content, core features and functionalities of the platform from six focus groups that included both parents and caregivers as well as professionals who work with people with ASD.

“Through these digital stories, people with autism spectrum disorder will be able to receive accurate information that will help them understand their own sexual development and the changes that occur during puberty, distinguish appropriate from inappropriate behaviour, and practice the behaviours which are in accordance with social norms when it comes to sexuality,” says UNFPA consultant Stankova.

Lozana agrees that the sexuality education stories will be very useful for her in communicating with her son. “I am very happy that this tool is aimed at improving the overall quality of life of the whole family, but mostly of the children with autism,” she says. 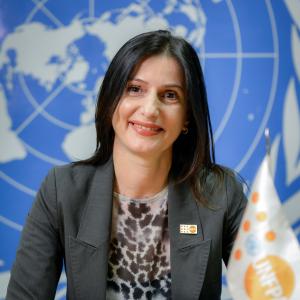